A student from the Kumon Toongabbie Education Centre has achieved an offer into the academically selective James Ruse Agricultural High School.

Dharmik, a Year 6 student, excelled in his selective school entry test and has since been offered a seat at the James Ruse Agricultural High School, one of the most academically selective schools in New South Wales. 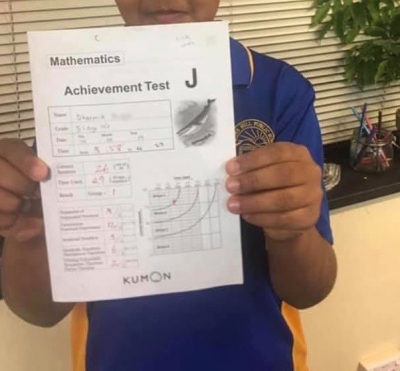 Dharmik holding up his Level J Achievement Test in Kumon Mathematics. Face not shown as per request of parent.

Dharmik has been a long-term student of Kumon Toongabbie and completed Kumon English last year. He is currently studying the Kumon Mathematics programme at a senior high school level and can solve complex equations.

“I would like to take this opportunity to thank Kumon Toongabbie. Kumon has played an integral role on Dharmik’s education journey and also to his success”, Kalpesh said.

“The benefit of Dharmik starting Kumon early is he mastered the fundamentals in mathematics and English. This helped him grow quickly through his education.”

“Studying ahead of the school assisted my son to excel in the selective entry test.”

“While Dharmik received one of the highest scores for a selective entry test among the students of Kumon Toongabbie, each year we have a number of Year 6 students who achieve entry into a selective school”, Manoji said.

“A common denominator across each of these students is an early start at Kumon, such as in the case of Dharmik who started Kumon in preschool. The second key factor is commitment to the daily aspect of Kumon, which is an average of 20 minutes per subject”.

We offer a big congratulations to Dharmik for his achievements!

The Kumon Mathematics programme develops quick, precise calculation skills necessary for the study of high school mathematics and can help all students to excel academically, while Kumon English develops a high level of reading comprehension ability in students.