Racing to success in class and on the track 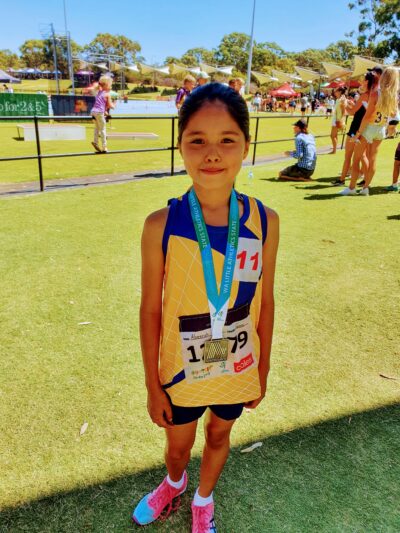 Abeerah, 10 years old and in Year 5 at school, is racing ahead on the athletics track while also catching up in the classroom.

Abeerah is a Kumon English student who caught up to her school grade after just over six months of enrolment.

“Kumon has helped me with my grammar and writing skills, so I know where to put my punctuation, and my verbs, nouns and adjectives”, Abeerah says.

She is also a long-distance runner who has competed at the state-level, representing Western Australia, with her local little athletics club.

Abeerah is aiming to become a brain surgeon when she grows up. She says that physical and mental fitness will be key for this endeavour.

Shehnaz, Abeerah’s mother, says she has seen quick improvements in her daughter’s reading and writing since enrolling her into Kumon. Abeerah is now up to speed with her grammar, Shehnaz says.

“Abeerah has also been running since she was around six years old”, says Shehnaz, “She began excelling in athletics events at school. Then Abeerah joined her local little athletics club, making it to the state-level, and winning a silver medal in her first event”.

Shehnaz says both Kumon and athletics are great for Abeerah’s overall wellbeing.

“Athletics is one of her favourite sports”, Shehnaz says. “So far, she’s happy with Kumon. It’s helping her with her writing. So, she’s doing well in school and with athletics”.

Since August 2021, Kumon has partnered with Athletics West, the governing body for athletics in Western Australia, to support their outreach programs into local schools. Kumon students and Athletics West athletes both recognise the importance of persistence and practice to achieve results.

Kumon’s support for children’s sport is not limited to WA. To learn about our partnerships throughout Australia and New Zealand, visit: https://au.kumonglobal.com/kumons-ongoing-contribution-to-our-community-in-2022/