Through solving advanced mathematics such as differentiation and trigonometry, siblings Lutanda and Malaika are way ahead of the curve. 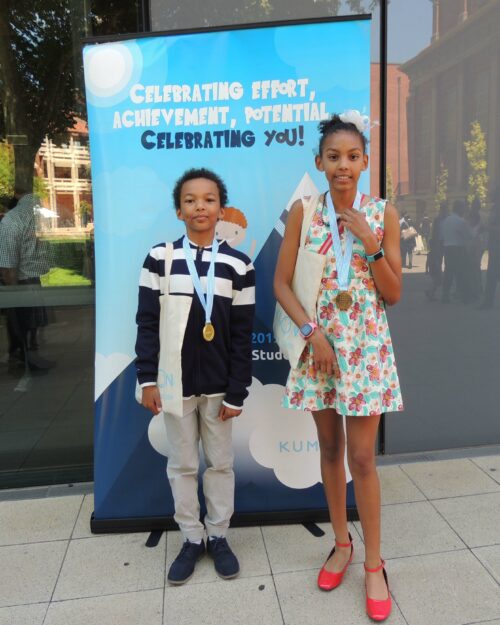 Kumon Mathematics develops quick, precise calculation skills necessary for the study of high school mathematics, and students progress at a rate determined by their ability, not age. It is a comprehensive programme, including topics such as number recognition, counting and writing; the four basic operations of addition, subtraction, multiplication and division; fractions and decimals; and algebra, equations, functions and calculus. Each worksheet builds on what has come before and prepares students for what comes next.

Malaika says Kumon has helped her greatly, both in mathematics and elsewhere.

“I find school maths easy to do and I’ve been placed in the top maths class at school”, she says. “I also believe that Kumon helps me in other subjects, such as science, especially when we are dealing with figures and numbers”.

Malaika says Kumon has boosted her ability to focus and remain disciplined, which helps her both in school, and in competitive tennis and athletics.

“Kumon plays a major part in the discipline I apply when training for my competitions”, Malaika says. “This is the discipline that I have had since I’ve been doing Kumon from when I was in year two”.

Lutanda says that Kumon has helped him greatly in school and to develop discipline, which he applies to his schoolwork, swimming, and tennis. He also says Kumon helped him to build perseverance.

“For example, when I find some school work challenging, I do not give up and keep on trying until I understand what I’m meant to be doing”, Lutanda says.

In recognition of their achievements in Kumon Mathematics, Lutanda and Malaika were invited to Kumon’s 2021 Virtual Advanced Student Forum, held each year in November. Despite moving to a virtual format due to the pandemic, this forum is where Kumon’s highest achieving students are celebrated. Attending students also hear from a range of guest speakers and have the opportunity to network with one another.

“It’s always great to be invited to Advanced Student Forum”, Lutanda says. “This is the fifth time that I’ve been invited and I always get inspired when I listen to the stories that the invited guests share with us. I also find the environment to be very motivating”.

Musenje, Malaika and Lutanda’s mother, says she is proud of both of her children for their achievements in Kumon.

“I’m ever so proud of them and proud of their achievements, and really appreciative of all the hard work that they put in”, Musenje says. “It just goes to show that if you put your mind to something and you work really hard, something is going to pay off”.