A group of mathematics students from Kumon Westmead Education Centre have been recognised for their advanced capabilities by the CSIRO.

The CSIRO Bebras Australia Computational Thinking Challenge is part of an international initiative to promote computational thinking among students. In the challenge, students had to solve mathematics word problems and coding questions. 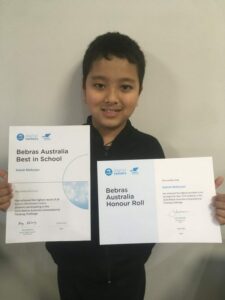 Kalash said he practised a lot to prepare for the challenge. This included reviewing past papers of the CSIRO Bebras Australia Computational Thinking Challenge.

“I did a lot of maths and solved a lot of problems”, Kalash said. “As I solved the problems, I felt more happy, excited and confident. Harder questions help my brain grow.”

Kalpana Dangol, Kalash’s mum, said she was very pleased to receive the news that Kalash achieved high distinction and that her son’s Kumon Mathematics study helped him in the challenge.

“As the questions he encountered in Bebras were generally harder than what he sees at school, and as what he is learning at Kumon is also harder than school, I certainly think that his Kumon helped him in the challenge,” Kalpana said.

Kalash is comfortably studying algebra and equations in Kumon, topics typically not seen until a student reaches Year 9 in school.

Swati Arora, Neev and Samay’s mum, was, “ecstatic and elated” to hear of the achievements of both her boys in the CSIRO Bebras Australia Computational Thinking Challenge. Swati also believes that Kumon helped her boys in the challenge.

“I think their way of solving equations, which they learnt in Kumon, is different, faster and better”, Swati said.

Samay said he enjoys maths because, “it keeps unwinding like a never-ending puzzle.”

“Kumon really helped me with the more complicated and mathematical questions in the CSIRO challenge”, Samay said.

Neev, meanwhile, said that being skilled at maths is more than only about being good with numbers. A strong ability to read is also needed, Neev said. Neev was also very happy to receive his results.

“I felt proud of myself for getting high marks and being on the honour roll”, Neev said. “I also felt great doing it, so I’m hoping to try again.”

Diana Chang, Instructor of Kumon Westmead Education Centre, said she was very happy to hear of her students’ results.

“We have ten students entered the Bebras challenge and eight students achieved merit and above status. I am really proud of every child’s achievement”, Diana said “I hope these children will use their skills to contribute to a better future for our next generation.”