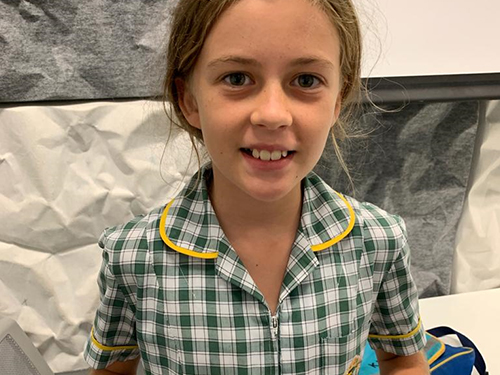 The prospect of writing and publishing a children’s book with her classmates doesn’t faze ten year old Kyara, a Kumon English student.

The Year 5 student is working on a project with eight of her classmates at school to write a children’s book. This will be published in her school library. Kyara is two years ahead of her school grade in Kumon English. She feels ready to put pen to paper.

“I think my Kumon will back me up. I can use all the extra vocabulary I have learnt”, Kyara says.

Kumon supports students learning by assigning them personalised learning programmes to develop their ability in comprehension and critical analysis. In Kumon, advanced students can tackle learning that sufficiently challenges their skills and piques their interest.

Kyara says that in addition to developing her English ability, Kumon has taught her to embrace challenges.

“I face a challenge I work towards overcoming it”, Kyara says. “If you don’t try you will never succeed.”

“She’s self-motivated and she studies on her own”, Shauntel says.

“This makes me feel more confident because I feel that no matter what Kyara chooses to do, she’ll smash it because … she’s motivated and she tries really hard until what she’s trying to do is done.”

Kyara aspires to be a journalist and TV presenter when she grows up.