Thinking outside the box with Kumon Mathematics and English 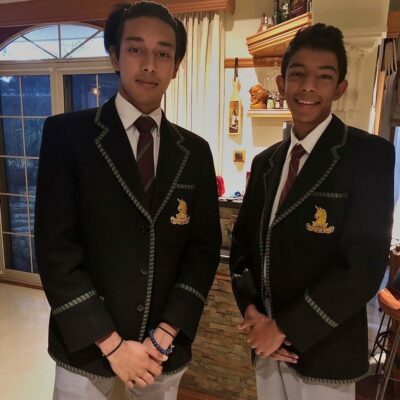 Kane (left) with his brother Kyle (right), who is also a completer of the Kumon English programme.

For Kane, 18 years old, the Kumon Mathematics and English programmes helped him to excel in school, think differently, and build the confidence to pursue his ambitions as he enters university.

Kane, a recent Melbourne High School graduate selected to pursue a degree in commerce at the University of Melbourne in 2022, was enrolled into Kumon Mathematics and English while in Year 2 of primary school.

The support Kane received from Kumon Mathematics and English benefited him greatly throughout school, he says.

“I think the Kumon English programme, particularly, allowed me to enjoy reading a bit more than I would’ve if I wasn’t enrolled”, Kane says. “This is because Kumon gives you a lot of range with the reading, and gave you a lot of good books that did interest me. It got me excited about English as a subject”.

“Kumon Mathematics allowed me to think outside the box. It exposed me to a lot of concepts that I wouldn’t normally be exposed to at that age”, he says.

Kane wants to start his own business after graduating from university. He also writes as a hobby, with many of his pieces published on his blog. Kane says that along with helping to improve in reading comprehension, Kumon English helped him to grow as a writer.

“Kumon English, especially the later levels, helped me to derive my own ideas from stuff that’s already written”, he says. “It also just helped me to love to read. I think that’s what’s allowed me to generate ideas of my own and share ideas that I found in books to other people on the blog”.