Sophia, Jude, and Ethan begin to realise their potential with Kumon 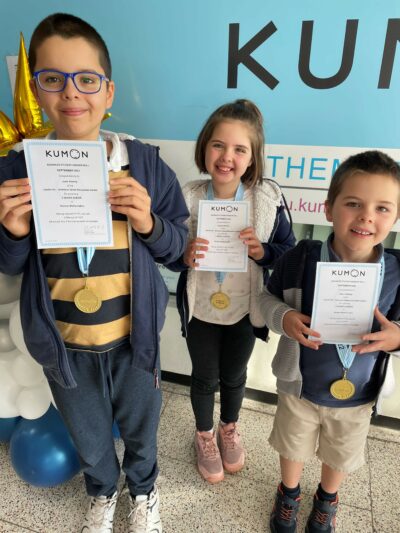 When Sara’s three children began solving mathematical problems that were far beyond their school grade level, she realised this was just the beginning of their potential.

Sophia, eight years old and in Year 2 at school, and Ethan, six years old and in Kindergarten, both study Kumon Mathematics at a level more than five years beyond their school grade. Sophia is studying polynomials and Ethan is learning about negative numbers.

Their older brother Jude, 10 years old and in Year 5, studies Kumon Mathematics more than two years ahead of his grade. He is covering simultaneous equations, monomials and polynomials, and factorisation in his Kumon worksheets.

Sara says her children moved quickly through the programme. She was amazed by their progress.

“We saw great progress, great growth”, Sara says. “Kumon was really helping them to the point where they were accelerated in enrichment classes at school. I was stunned at how quickly they were picking up new concepts.”

“If it wasn’t for the Kumon programme, I don’t think I would have realised how bright they are or what they’re capable of.”

Sophia and Jude also both recently competed in the Southeast Asian Mathematical Olympiad (SEAMO). Sophia won a silver medal and Jude achieved bronze. Both children say that the mathematical skills and knowledge they acquired from Kumon helped them in SEAMO.

“Kumon helped me get through the basic calculations quickly, leaving me more time to spend on the more complex maths problems”, Sophia says.

“It was able to work through the questions quickly in SEAMO. This gave me enough time to check over my answers”, Jude says.

Sophia hopes to become a general practitioner or surgeon when she grows up, while Jude wants to become a pilot. Ethan is aiming to become an engineer. He says mathematics will be especially relevant for his future.

“I would love to be an engineer and design complex buildings”, Ethan says. “I enjoy building huge structures with Lego on my own. Kumon makes me faster at calculating maths problems, and that’s important if you want be a great engineer.”

Sara says the Kumon’s individualised nature of Kumon has been of great benefit for her children.

“The thing I love about Kumon is it doesn’t limit them; it extends and accelerates them. It’s so tailored”, Sara says. “This has also helped mould them into more resilient kids, where they know that if there’s a challenge, not to give up, but instead to show perseverance and continue”.