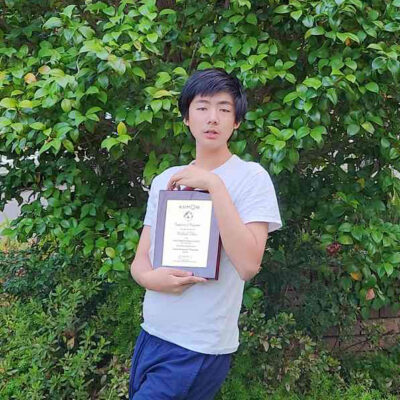 Michael with his completion of programme plaque.

Despite only just finishing his second year of high school, 14-year-old Michael has completed calculus in Kumon Mathematics and is racing ahead.

Michael, who is concluding Year 8 at school, has already completed the Kumon Mathematics programme and is studying the optional Level X. This is level has students studying triangles, vectors, matrices, mapping and transformations, probability and statistics.

Level X is an optional set in Kumon Mathematics students who want to extend their skills beyond calculus. Michael says that he enjoys challenging his mathematical capabilities and believes that this extra learning will be of great benefit to him.

“The skills I have learnt in Kumon will definitely continue to help me in later life”, he says. “Mostly due to my future jobs that I would love to do, which are actuary and architecture”.

Michael was enrolled into Kumon Mathematics when he was in preschool. His mother, Rachel, says that the programme has been instrumental in developing his passion for mathematics.

“As Kumon is individualised to his ability. the questions provided by Kumon are at a much higher level”, Rachel says. “It continued his interest with maths by fascinating him over and over again with new concepts and theorems.”

The Kumon Mathematics and English programmes are individualised for each student’s ability. Students who need to build on foundational concepts are supported and those who can be challenged by more complex work are extended. Students progress at their own pace, not bound by age and school grade.