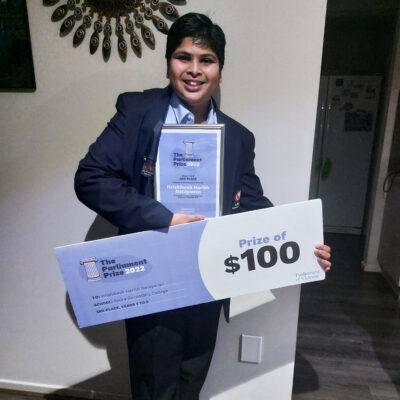 Through completing both the Kumon Mathematics and English programmes, 13-year-old Hrishikesh has gained a wide range of skills that will benefit him throughout university and later life.

Hrishikesh, who is in Year 8 at school, has the mental calculation and reading ability of a Year 12 student, along with strong organisational skills and confidence in his own ability. This has given Hrishikesh the confidence to participate in a wide-range of extracurricular activities, such as Victoria’s Parliamentary Speech Competition, where year 5 to 12 students deliver a 90-second statement about issues important to their community.

Hrishikesh achieved a third-place prize in this competition.

“My humanities teacher at school suggested the parliamentary prize because she wanted to understand what we thought was important”, he explains. “So, I argued as to why teachers should be paid more. I chose this issue because my mum is also a teacher and I have firsthand experience from her.”

Hrishikesh also says that his completion of the Kumon English programme was of great benefit to him in the competition.

“My vocabulary greatly improved from Kumon English”, Hrishikesh says. “I was able to implement that during the speech. The never-give-up attitude and approach of taking on new challenges definitely helped me out as well”.

Hrishikesh also recently achieved entry into the academically-selective Nossal State High School. His mother, Dhanya, says that Kumon’s focus on speed and accuracy allowed him to ace the test.

“Your child will become an advanced learner through Kumon. It’ll improve their speed and accuracy in maths, enhance their reading horizon and improve their vocabulary,” Dhanya says.

Hrishikesh aims to become a mathematician or physicist when he grows up. He believes that his completion of the Kumon Mathematics programme will help him greatly too.