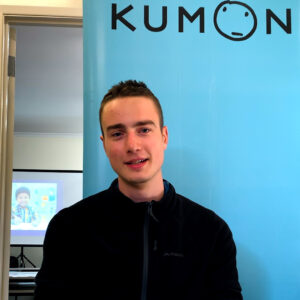 Hugh, computer science student at the Univesity of Adelaide and Kumon Mathematics and English programme completer.

Hugh, who now studies computer science at the University of Adelaide, believes he would not have had a passion for mathematics if he did not enrol with Kumon when he was younger.

Hugh, 18 years old, studied Kumon Mathematics and English throughout primary school and completed both programmes in early high school. He says Kumon has had a profound influence on his life.

“Kumon made me passionate about maths”, Hugh explains. “I started not really liking mathematics, but Kumon gave me an insight into different mathematical techniques and that fueled me throughout high school to pursue a lot of subjects involving maths”.

“I did chemistry and physics in the International Baccalaureate diploma, and I went on to use maths in university. If it weren’t for Kumon, I probably wouldn’t have had that passion for mathematics”.

The Kumon English programme also turned Hugh from a reluctant to avid reader, he says.

“I tended to get bored with texts; I never liked tragedies, never liked plays”, Hugh says. “Archaic language was always boring and I found that immensely challenging to read. But after being exposed to that slowly in Kumon, I started to enjoy it. Now even in my spare time, I read. I like to read and I aim to read a book a week”.

“Kumon helped me overcome the challenge of encountering topics I don’t like. I’m able to become a more well-rounded individual by doing things that challenge me”.

Hugh hopes to complete his degree and pursue a career path that involves computing and mathematics.